I thought I’d start the Sunday Monday Post so I can to talk more loosely about the things I’ve enjoyed within the self-improvement sphere and how I think I’ve improved in the past week (or since the time of the last edition).

It won’t be a very structured article and will probably involve more jokes than  are necessary. However, you probably won’t notice them because I’m not very funny. If I say I’ve told a joke then you need to laugh to make sure I don’t cry.

Nonetheless, let me think about what’s happened to me this week

I have  unbelievable news.

As in, when I go into the water and try to move forward I don’t begin to drown straight away or wonder why I decided to ever even think about getting wet with chlorine in the first place. I actually move forward (or backwards because I can do the backstroke too. Just saying.) It’s fascinating.

When I first moved through the water without touching the floor, I nearly punched the pool wall because I was so excited that it happened. I’ve only had four lessons so I didn’t expect it to happen as quickly as it did.  Then I tried again but drank far too much pool water. Then I tried again, made a few changes, then I stopped drinking an excessive amount of pool water. But then I might make a different mistake like not actually kicking my legs. Then I’d go again.

But at least I’d be making small changes every time I came to stop. It made the whole swimming thing much easier to manage than trying to complete everything at once. Nonetheless, at the end of the session, I was swimming a decent amount. I can’t do it very far or for very long but it’s much better than the way I was like 15 years ago.

Any time I’d try to get into the water, I’d just flail around, it’d take me forever to progress onto the floats but as soon as I had to support the majority of my body weight, it’d be like my body mass tripled and rather than moving forward through the water, I’d just move down.

Let’s forget the general idea that humans actually float in the water or the fact that you can stand up in training pools. I couldn’t do either. I’d just be dead for the most part.

But now, I don’t die. I just swim for a bit and die a bit later.

To commemorate this moment, I drew a bunch of pictures:

Before my swimming lessons, I found a few different swimming tutorials which gave a few pointers on how to get over the fear of water.

I started to break down the different parts of swimming practiced them individually (though, I always tried to breathe). It made swimming much more manageable. 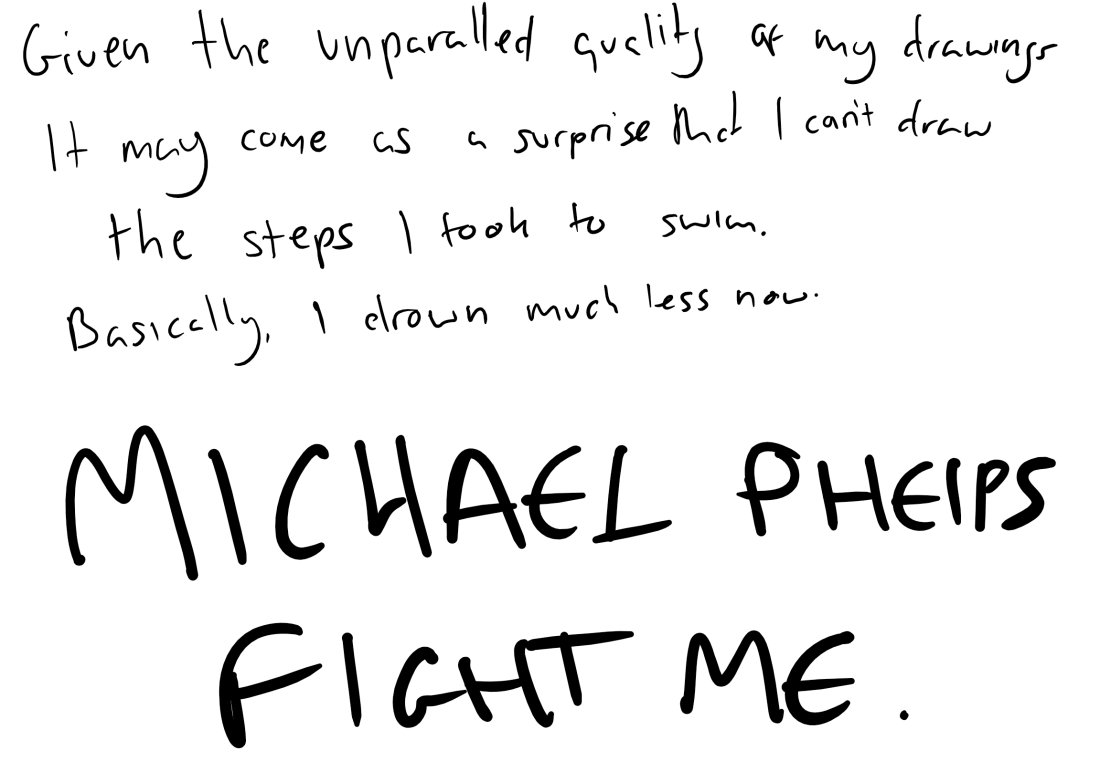 I’ve conquered years and years of fears by learning how to swim. I’m not very good but that’s OK. I’ve taken the first step. Now I can continue working on swimming and improving slowly in the process.

As always, thanks for reading :)

Yes this is on a Tuesday. No, I don’t know why.

View all posts by Improving Slowly

2 thoughts on “The Sunday Monday Post | I Can Swim”