I was looking through my reading list and saw there were no black or ethnic minority authors. But more importantly, there was no reason for there to be any. Why would they be if they just don’t pop up anywhere unless I look for them specifically?

Of course, that initial thought has to be false. Maybe they’re just very rare.

I did some research to find out whether I’m mistaken and simply haven’t been exposed to them. Perhaps they are much more visible than I thought.

I used two sources – Brainpickings.org and the New York Best seller list. There are brief notes on my method and the strength of possible conclusions at the end. For now, we’ll look at the demographic breakdown from these sites.

One of my favourite sites ever. Maria Popova, the author, can be described as the ‘discovery engine for interestingness’. She focuses on things related to creativity, how to live the good life and much more from the large wealth of books she reads and writes about on a daily basis.

She’s probably one of the most well-read people in the world, and has a close eye to include female authors to combat what she calls “male intellectuals’ tendency to extoll almost exclusively the work of other male intellectuals”. Given this, I thought she’d offer the best chance at seeing authors who are black or ethnic minorities.

Fortunately I was correct. From the brief research done, she did provide the best chance. 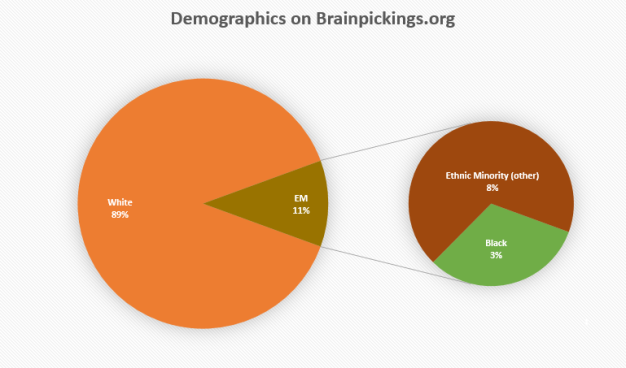 Of 197 unique authors, illustrators and a few other professions, I found over 30 articles from 14th August (a very small sample size given how much she produces!), there were 21 ethnic minorities. Included in that were 7 black authors.

The male/female divide fared slightly better with 138 males and 59 females. This may seem very unequal but if you’re a regular reader of her work, you’ll find that she writes about female authors with admirable frequency. You’ll also know that she’s a great fan of Susan Sontag’s work as she came up with the most repeated mentions at 5.

Before we continue, can we sit and awe at the number of authors mentioned?

This was more disheartening.

It is important to note it’s a simple list of books that sell the best over the course of the week. There could be 1000 black authors who sell 1 copy each and 15 non-black authors that sell 3 copies each and they’d dominate the best seller list.

The scope was from the 12th July to 23rd August.

With that being said, here are the results.

In the fiction list, there were 64 authors with 41 females and 23 males. No black authors. I broadened it to ethnic minorities and the result was still zero.

Non-fiction was slightly better. From 53 authors there were 31 males, 22 females, 8 ethnic minorities and from that 2 black authors (Ta-Nehisi Coates and Ishmael Beah).

Here is the total breakdown: 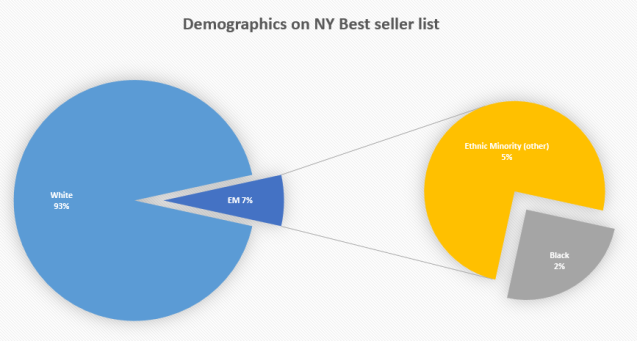 From over 300 authors there were 29 ethnic minorities and 9 black authors.

Can’t I read whatever I want?

I think it’s important to rid ourselves of the stigma of having to read certain types of books. Although helpful at times, I dislike lists of the type, “10 books every intelligent/smart/successful person should read” because if a person simply doesn’t want to read those books, they needn’t be deemed stupid in any sense.

I read children’s books from time to time and that doesn’t mean I’m childish. If it did, so what?

So I don’t want this to be construed as an article demanding you read black authors because they’re pushed to the side but as an invitation to extend your reading list. Some standard suggestions are:

The Colour Purple by Alice Walker

I Know Why the Caged Bird Sings by Maya Angelou

If you’ve read these books in secondary school and found you disliked them, it might be helpful to try again without the pressure of having to analyse the fun out of them.

What can I conclude?

Given the scope of the research, small sample size and great complexity surrounding issues behind race, the answer is ‘not much’. Though, it does lead to useful points of discussion.

Firstly, it’s clear that black authors don’t tend to be in regular reading lists and because of that, it’s very difficult for their work to spread further compounding the problem. Black authors are definitely not in any kind of limelight when it comes to published writing. I feel this is enough to confirm suspicions that you could easily go many years without picking up a book written by an author of ethnic minority without having to look for one specifically.

When I decided to start this small amount of research, I was inspired by my own reading list. So you can ask yourself two questions:

The second question leads to more speculative territory. That being we tend to read such authors, not because they’re just regular writers but because they write important things about race. Whether that’s good or bad, I’m unsure but I’d rather it wasn’t the only reason we were drawn to them.

From the evidence here, I can’t conclude anything about why there is such a great imbalance nor can I say anything about how it can be changed or whether it needs to be. So I won’t.

What I do want from this is to draw attention to the imbalance as I think it’s worthy of discussion.

A few notes on the method.

This is the boring part.

My method wasn’t particularly precise or efficient but after reviewing it, I don’t think it takes away from my core point. Both lists were so heavily dominated by white authors that a few mistakes won’t weaken my point.

There are bound to have been a few mistakes and there were also a few people I wasn’t sure to include as an ethnic minority. I decided to include them anyway.

What do you think about black and ethnic minority authors? Is the lack of publicity a problem? Is there any problem here?

View all posts by Improving Slowly